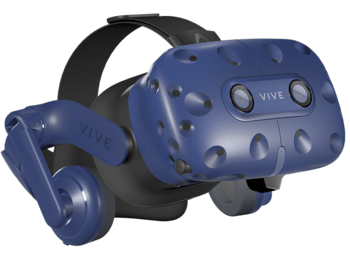 The HTC Vive Pro has been on the shelves for a few months now, but is it worth upgrading to the new headset over its early predecessor? Find out in this HTC Vive VS HTC Vive Pro showdown!

The two VR headsets are in fact very similar although the Vive Pro has had some noticeable upgrades. There is a new headset strap that is claimed to be more comfortable and the headset is meant to be more lightweight overall.

HTC has also added new built-in headphones that seamlessly fold down onto the player’s ears. The HTC Vive Pro boats the new lighthouse 2.0 tracking too to allow for full room-scale tracking.

But are these updates worth the extra cost?

Let us tackle the differences between these two together so that you can get an idea whether the new HTC Vive Pro is worth it.

There are a few immediate differences with the HTC Vive Pro in terms of design. Firstly, it has clearly borrowed the head strap design from the deluxe audio strap upgrade that was released for the original HTC Vive.

The head strap is definitely firmer and can be easily adjusted using the dial at the rear. This contrasts the HTC Vive which had velcro straps. The head strap is also much easier to put on. You can just place the headset towards your eyes and then pull the strap down towards the back of your head. Then just adjust using the rear dial at the back.

The HTC Vive Pro has also had its face cushion redesigned and its nose pad. The new design helps alleviate light bleeding into the headset that was a problem with the original HTC Vive. Some people have expressed that the new nose pad can put excessive pressure on your nose and leave you with a strong indent after long play sessions. Overall, however, it is definitely an improvement.

One of the more noticeable design improvements with the HTC Vive Pro is the inclusion of built-in headphones. These are highly customisable, they can be titled away, up or to the sides very easily. This makes it much easier to hear others around you.

As you can probably see the Vive Pro has also had a facelift. By that I mean it has gained a new ‘eye’, or camera. The dual camera setup has not been fully taken advantage of yet but the tech is there for developers to use to improve tracking in the future.

The new features of the Vive Pro have reportedly not made the headset any heavier so your experience should be similar to that of the original HTC Vive. HTC do claim that the headset is more ergonomically balanced and lightweight. However, Linus Tech Tips reported that he found the opposite. He much preferred the original Vive because he found the new Vive Pro uncomfortable.

The Vive Pro has also provided more flexibility for all the glasses wearers out there. The lenses can be adjusted to increase the distance between the user’s eyes and the surface of the lenses. This should stop any of those accidental scrapes or bumps or long eyelashes pasting mascara across those precious lenses.

Design wise the Vive Pro does add a few very useful side pieces. From the additions to built-in headphones, adjustable lenses and a solution to the light bleeding. The HTC Vive Pro wins this one.

The main reason most of you are interested in the HTC Vive Pro is the display quality. HTC has upgraded to use AMOLED technology for the panels. This has increased the Pro’s display to 2,880 x 1,600 vs HTV Vive’s 2,160 x 1,200. This is an increase in pixels by around 80%.

Of course, this has benefits to the display which now has improved clarity and crispness which greatly increases a players immersion. Players can also view objects at much greater distances without seeing pixelation.  Text in game also appears with much crisper definition and a lot less jagged edges.  This helps reduce eye fatigue on longer playing sessions.

The HTC Vive Pro has also made noticeable improvements on the ‘screen door’ effect where you can see the individual lines between the pixels. A problem more noticeable on cheaper tech.

The field of view between the two models has not changed, neither have the lenses. Both use the same fresnel design so you can expect the same issues in relation to trying to view bright objects in darker areas.

Fortunately for any of you upgrading to the HTC Vive Pro, it is fully compatible with the original HTC Vive trackers and controllers.

The new generation of lighthouse trackers or base stations (Lighthouse 2.0) allows for up to four of them to be set up which should provide much more accurate tracking and a larger play area. These have been released and now ship with the Vive Pro Full Kit.  Note that these are not compatible with the original HTC Vive headsets.

The controllers have had a nice repaint to match the colour of the HTC Vive Pro.

HTC have now introduced their own wireless adapter which allows you to remove all cables directly connected to your PC. This way you can play purely wireless using input and output with Intel’s new low-latency WiGig technology.

There is a receiver-transmitter that mounts onto the top of your head. The PC then receives the information through an antenna. The headset will be powered by a USB battery pack and is backwards compatible with the HTC Vive.

There has been good feedback in that it added no noticeable lag in comparison to when it was plugged in which is great news for improving our VR experiences.  It isn’t fully released at the time of this article but is labelled ‘coming soon’ on the HTC website.

The original HTC Vive received a lot of criticism in regards to its audio, it shipped with bundled earbuds which weren’t particularly good.

The HTC Vive Pro has tried to address this by providing built-in headphones. The headphones are highly customisable and manoeuvrable which is great for tilting them on or off.

If you don’t like the headphones you can detach them and use your own so you are not tied down to them. This is something you might want to do if audio is particularly important to you as Linus Tech Tips noticed the audio quality can be particularly tinny at times.

The Vive Pro has a single microphone for voice chat and is capable of noise-cancelling to get rid of those pesky outside mumbles. Another nice feature is conversation mode which makes it easier for you to hear people trying to speak to you in the real world.

There are also dedicated media control buttons for controlling the volume and a mute button. This saves so much time as you no longer need to go to SteamVR every time you want to adjust the output levels.

The new built-in headphones are a nice addition that definitely tips the vote in the HTC Vive Pro’s favour. They might be a little tinny but for most players, they should do the job just fine.

As with most VR headsets, the HTC Vive Pro can be quite demanding on your rig. You need to have a solid setup to get the most out of your VR headset.

If you can’t reach sufficient frame rates (at least 80+) you are truly missing out on what VR has to offer. The HTC Vive Pro has increased the requirements to the next generation of graphics cards.
For more information on testing your rig to see if it meets requirements, HTC has a handy tool you can download and it will run a diagnostic to see how you rig will perform. 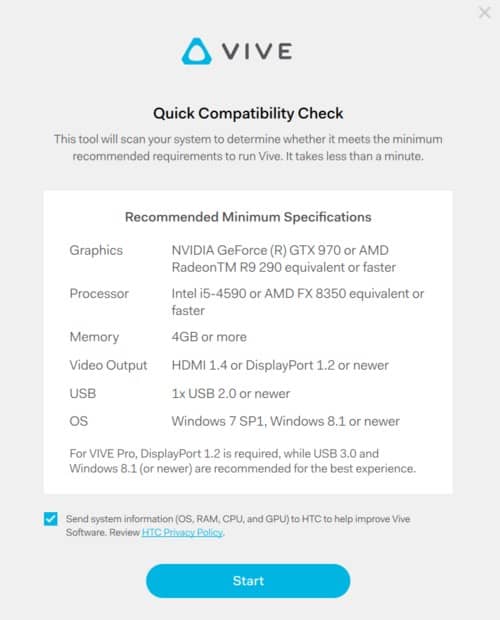 You are required to have at least a GTX 1060 or RX 480. The recommended setup is to have a GTX 1070 or above. These are some high requirements but they should not be ignored or you will not get the experience you desire with the Vive. You will also require a solid CPU as your CPU shares a lot of the workload too.

It should be noted that many of the games on SteamVR and HTC’s Viveport won’t take full advantage of the new Vive Pro’s features until developers start utilising them and until the trackers and controllers are taken advantage of.

Now to the potential deal-breaker for many. The HTC Vive Pro, put bluntly, is very expensive. Fortunately, the HTC Vive has fallen in price to around $500 with controllers and the trackers. However, HTC Vive Pro goes for around $800 and that is just for the headset. To get the full whack including controllers and lighthouse 2.0 trackers will cost you around $1,399.

So if you buy the HTC Vive Pro headset separately, then the controllers and trackers will set you back a further couple of hundred dollars, it is better to pick up the bundle.

The HTC Vive is much more affordable in comparison but it’s up to you how important the features of the new Pro are.

Final Verdict – Which should you buy?

The HTC Vive Pro brings new sharpness and quality to the VR gaming experience. But with such a huge price tag it is only worth it if money is not a problem. It has some great new features that will definitely improve your experience with VR.

The Vive Pro also seems more suited towards VR enthusiasts, businesses and arcades because it’s easy to put on and take off and benefits from larger open spaces. The headset also does seem to move slightly more while playing more rigorous games.

You may want to wait until there are new games released that take advantage of the HTC Vive Pro’s features. Until then I would recommend picking up a HTC Vive.

Check out Linus Tech Tips’ opinion on the matter.  He provides some good points and some personal experiences in regards to the comfort of the Vive Pro.

PrevPreviousBest Tenkeyless (TKL) Mechanical Keyboards In 2021
NextLogitech G403 vs Logitech G703 Review – What Is The Difference?Next