Razer are raising the bar yet again.  The Razer Viper Mini is potentially the best budget gaming mouse available.

Razer have been killing it lately with the release of their Viper series and to add to the Viper & Viper Ultimate we have the Razer Viper Mini.

Let’s dive in and see what Razer’s budget mouse has to offer.

Quick Answer:
The Razer Viper Mini is an absolute steal at this price . It is probably the best budget gaming mouse available at the moment. Read on to find out why.

The Razer Viper Mini is very small, so small in fact that it is smaller than the Glorious Model O Minus but has a slightly higher hump. Compared to the Finalmouse Ultralight 2 the Viper Mini is slightly longer, has a similar grip width but has a higher hump. I will get into more detail about what this means later.

At 61g it is one of the lightest gaming mice on the market right now just behind the Finalmouse Ultralight(47g), Coolermaster MM710 (52g) & Model O minus(58g).

Currently there is only one colour available for the Viper Mini which is black. There has been rumours teased that Razer will be making a white version so stay tuned for that. It is also worth checking in case it has been released since the time of this article.

The coating of the Viper Mini is a textured matte plastic. The primary mouse buttons and side grips have more of a rough texture to them whereas the hump is smoother.

Razer have collaborated with many different mice enthusiasts within the gaming mice community and the mouse review subreddit on Reddit. They wanted to ensure that the Viper Mini was built along with valuable input from their target audience.

Small mice have become popular because they are more lightweight and can often lead to better aim. If you read reviews of this mouse elsewhere you will find people complaining about it being too small but this mouse is definitely not too small if the its used by the right people.

Typically this happens because the reviewer is used to large, heavy mice and probably palm grips so they are testing a mouse not designed for them.

The Viper Mini has been designed specifically for claw and fingertip players.  It is suited for people with small to medium hands as it has a narrow grip width at 5.35mm and is only 11.83mm long.

It’s ambidextrous shape is similar to the Zowie FK and Model O series. It is low profile but Razer has purposefully raised the hump in order for the mouse to suit a wider variety of grip styles.

The side grips are different on the Viper Mini vs Viper Ultimate and regular Viper. There are no rubberised dimples and the texture is a rough matte plastic. Many prefer the smooth plastic on the sides as it is more durable and makes grip tape hold in place better.

The sides have a natural curve from back to front similar to the Model O but the back has a steeper angle.

Considering the insanely cheap price Razer have had to cut costs somewhere. The Viper Mini uses the PMW3359 which is a solid sensor however it isn’t top of the line. It supports between 200-8,500 DPI which is more than enough for most players. Having playtested the mouse for countless hours there has been zero spin outs or tracking issues.

The Razer Viper Ultimate uses Razer’s new Focus+ sensor which is one of the best on the market along with Logitech’s HERO. The standard Viper uses a PMW3389 or ‘5g’ as Razer has called it. Both of these sensors are better than the 3359 in the Viper Mini but it isn’t noticeable.

If you were to put each of these mice in front of me I would not be able to tell the difference. The 3359 will still serve you well and I have been unable to find any issues with the sensor.

Due to its small form factor the Viper Mini is suited towards claw and fingertip players. You could also palm grip it but you would need to have small hands of around 17.5cm or less.

Small mice are suited towards fingertip and claw grip because they are lightweight and easier to position. The small hump also means it provides a small amount of support if claw grippers like to rest part of their palm on the arch.

For those of you that know your grip style, the mouse is perfect for a 1-3-1 grip. If you use a 1-2-2 grip you might find there is limited room on the right side of the mouse. 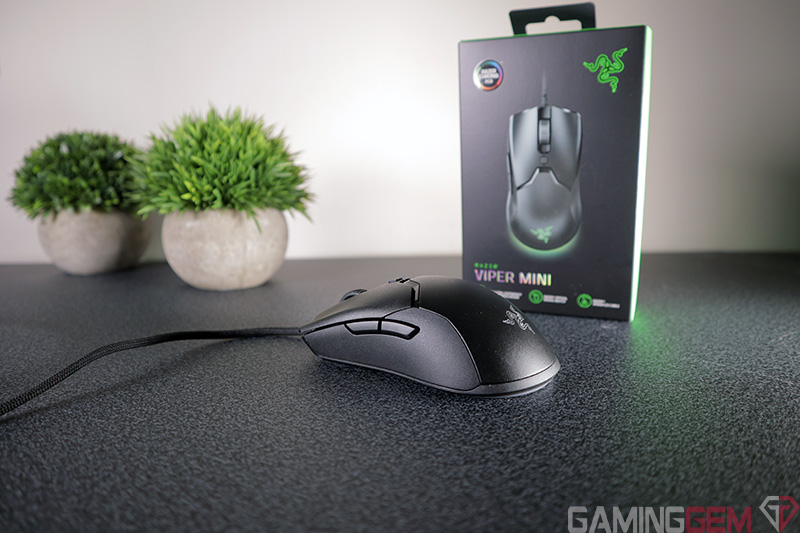 Razer have stated that the Viper Mini clicks have improved vs the Viper Ultimate & regular viper. They are definitely a lot crispier, sharper and more responsive. I still liked the Viper Ultimate’s clicks but they did not feel as snappy as the Logitech G Pro Wireless.

The Viper Mini primary mouse buttons feel incredible for the price. The Viper Ultimate is around $150 and the Viper Mini has better clicks which is impressive. I suspect Razer will be upgrading the clicks in the Ultimate soon.

As for the side buttons Razer have listened to feedback and made these much easier to press. One of the complaints about the Viper Ultimate was that the side buttons were very small and that they didn’t stick out enough from the shell.

This made it difficult to roll your thumb up and press them like you would with most mice. With the Viper Mini, Razer has listened and the buttons now protrude out of the shell making them easier to activate.

The side buttons have a small amount of pre-travel but it isn’t noticeable when gaming.

The scroll wheel on the Viper Mini has small dimples on it to improve grip similar to the Viper Ultimate and regular Viper.

Overall the scroll wheel has defined intervals which feel good and even. The scroll wheel click is lightweight and can be actuated easily which is great for those of you that use it as a keybind 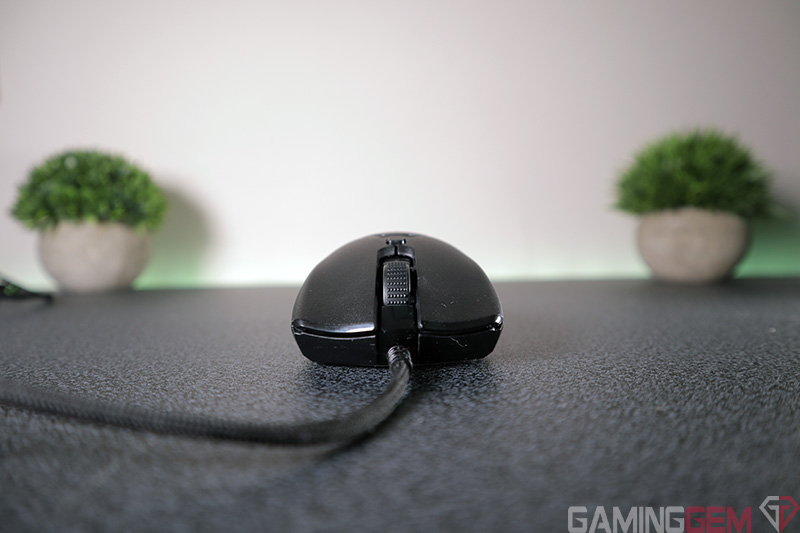 Razer have stepped up their cable game adding what they call ‘speedflex’ cables which are a huge upgrade to the typical rubber cables you might be used to.

The speedflex cable reduces drag on your mousepad and stops your cable snagging on everything. If you put the cable in a mouse bungee too the mouse almost feels wireless.

It isn’t the best paracord on the market, the Glorious Model O cable, Coolermaster MM710, Finalmouse and XM1 cables are more flexible. There isn’t a big difference here though so don’t base your decision on this. 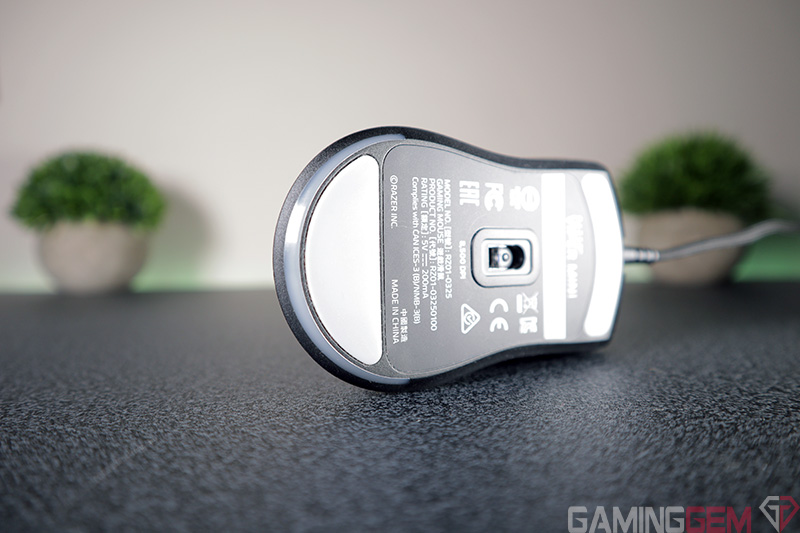 Razer have opted for full 100% PTFE feet which is quickly becoming the industry standard to ensure a smooth glide regardless of the surface you use. These feet are great and comparable to most mice on the market so for the Mini’s price this is a great added extra.

During my play testing I have no durability concerns with the mouse. The mouse buttons are separate from the shell which is sometimes a concern for mice because they can become wobbly after long term use.

So far I haven’t experienced this and for the price the Viper Mini has been surprisingly solid build quality wise. 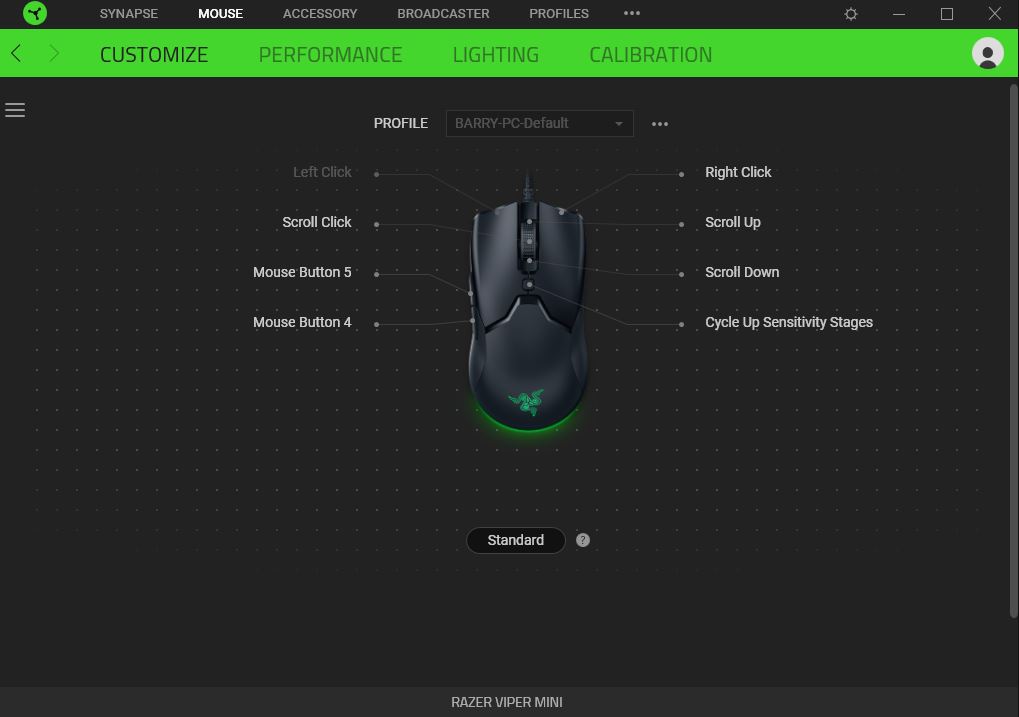 Like with any major Razer peripheral the Viper Mini can be utilised by Razer Synapse. From within the software you can set up all the RGB until your hearts content.

You can also configure each button and set them as macros or any functionality you desire. The DPI values can also be configured including changing each DPI preset to a value of your choice.

Razer are killing it with their recent peripherals and the Viper Mini is no different. It is probably one of, if not the best budget gaming mouse you can get right now. The Glorious Model O and Viper Mini are very similar and difficult to compare as they both have pros and cons.

For the price you are getting fantastic value. Premium level clicks, a stock paracord, PTFE feet and great side buttons.