Endgame Gear XM1 Review | Is It The Fastest Mouse Ever?

Endgame have created an awesome shape here with crisp tactile clicks.  This is an underrated ambidextrous mouse.

A great ambidextrous shape followed by some of the best primary clicks in the game.  Some room for improvement though.

The term ‘endgame’ is commonly used across gaming mice fanatics to say they have finally found their ‘end game’ mouse. So it is no surprise Endgame Gear’s first product is a gaming mouse!

Endgame have been promoting the XM1 as the ‘fastest gaming mouse ever made’ thanks to its analog < 1ms button technology. But is this just a marketing gimmick or can it have a positive impact in-game?

In this Endgame XM1 review, we are going to go through all the specifications and give you a verdict on whether Endgame’s first mouse is worth its price tag.

Lets break down the XM1 into a few of the most important categories that you should be thinking about before buying.

It is important to know your hand size and grip style to ensure the mouse will fit. I’ll touch on this in more detail later.

At 70g we have yet another lightweight mouse to choose from although not as light as the Model O-. The XM1 is a medium-sized mouse coming in at around 12cm with a narrow grip width.

The Endgame XM1 has a unique shape and before trying it I thought I wouldn’t like it but I was very wrong. I am a big fan of ambidextrous mice due to their symmetrical shape but it was the back of the mouse that concerned me.

The XM1 has a wide back at around 65mm and tapering off to the front at around 60mm. The grip width though is surprisingly narrow at 56mm so the mouse still feels small which is a big plus. The hump itself is quite high which made me worried as a claw grip player. But the narrow grip width makes this mouse very comfortable and I was surprised.

What makes the XM1 shape so effective is its very narrow front at the end of the buttons. It feels very natural to hold since your fingers fall in the same shape as the mouse.

After testing the shape over the past few weeks it might be my new favourite.  I need to test it more but I have been seeing some great success with this mouse. The tapered feel from back to front fits the base of the hand and palm tightly which has been allowing to me to hit some consistent shots.

I believe this is one shape that you have to try.

The Endgame XM1 is using the PMW3389 which is a high-end optical sensor. There has been zero spin-outs or any problems tracking.

The majority of the PMW sensors nowadays are nearly faultless so it is becoming less important to analyse the sensors unless they have some glaringly obvious problems.

The PMW3389 can be customised up to 16,000 DPI and can be configured within the mouse software or using the button on the bottom.

Due to its medium size yet defined hump and wide back it suits any grip style whether you are a fingertip, claw grip or palm grip player.

The hump provides support for palm grip players while being low enough to not get in the way for fingertip and claw grip.

The mouse has a matte texture coating which feels similar to Zowie’s mice. It is a huge fingerprint magnet though and impossible to keep clean. I found the texture grippy and reduced the amount my hands were sweating. 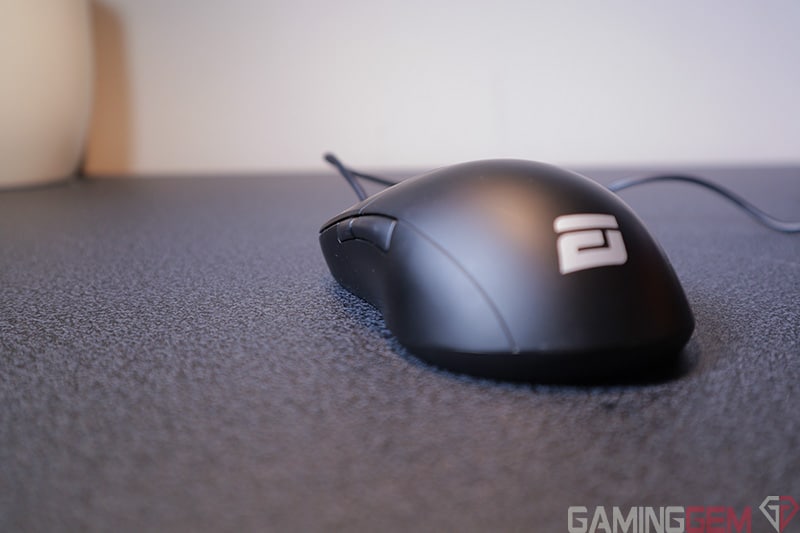 This is where Endgame gear is trying to sell the mouse stating that their primary buttons are using analog technology which have a delay of less than 1ms. I haven’t scientifically tested this to ensure what they are saying is true but it makes little to no difference anyway.

Mice technology has come a long way and there is no noticeable difference between the Endgame XM1 and any of the other top-end gaming mice. I have not seen any measurable improvement using this mouse over any other mouse in terms of latency or lag when it comes to the buttons.

With that sales fluff out of the way, the mouse 1 and mouse 2 buttons are seriously good.  I want to emphasise this because its not the ‘reduced latency’ that makes this mouse so special its the actual clicks themselves.

Logitech currently has the best mouse clicks in my opinion but the XM1 is the closest any other mouse has come in terms of tactility and general feel.

The switches themselves are Omron rated at 50 million clicks so they are the industry standard but they feel better. Whether it is the nature of the narrow tip of the mouse and how low the buttons lie I’m not sure but these clicks are fantastic.

As for the side buttons though, they are a different story. Initially I thought the side buttons were poor. They have a fair amount of pre-travel and the angled shape doesn’t feel good. I am not sure why they decided to go with this shape instead of the standard flat side buttons.

After using the mouse for a few weeks though the side buttons have grown on me a lot. That’s not to say they are good but they definitely don’t make the mouse a failure.

If Endgame gear upgraded the side buttons to feel more tactile and less mushy then it would drastically increase the potential of this mouse.

The scroll wheel feels great, for comparison its better than Zowie’s scroll wheels but not as good as Logitech’s.  The steps are very defined and I like the overall ‘looseness’ of them.

The scroll wheel click has a light actuation force which I love.  Too many scroll wheels require you to do weekly workouts with your fingers to be able to press them consistently without getting tired.

Lastly, the side grips are great, they angle down sightly which is really comfortable for my 1-2-2 grip.  The texture provides excellent grip and I have found I sweat a lot less using this matte texture. 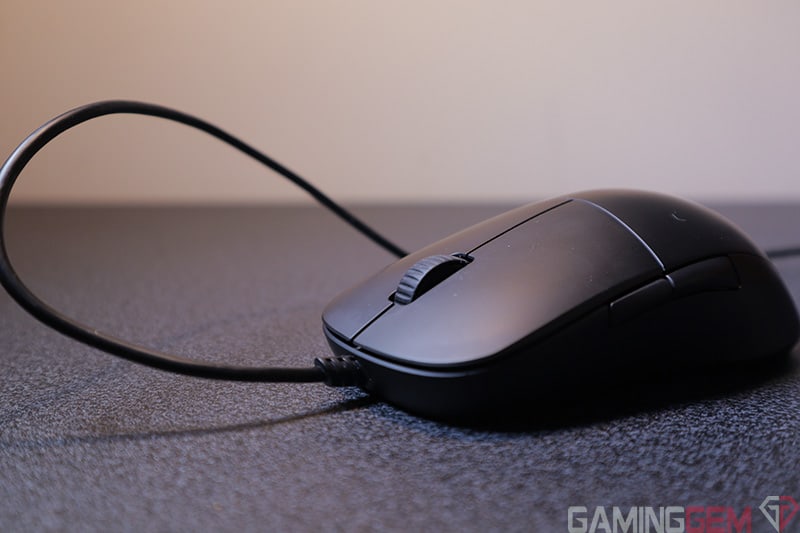 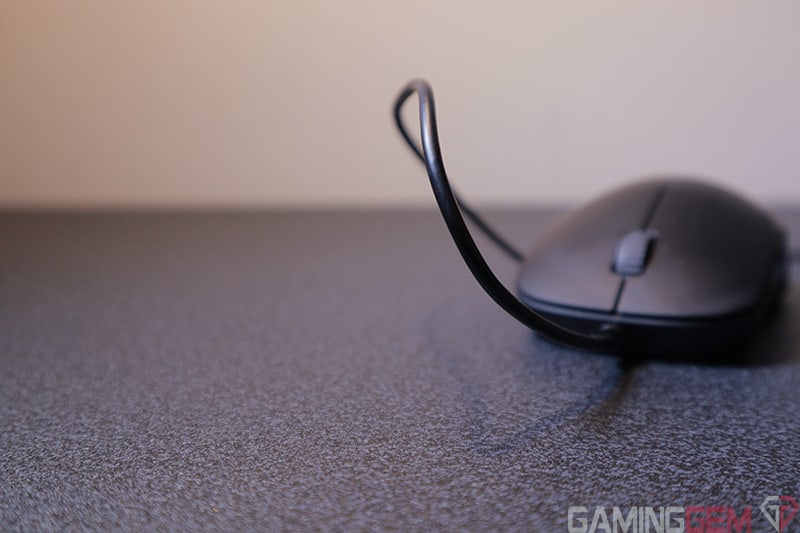 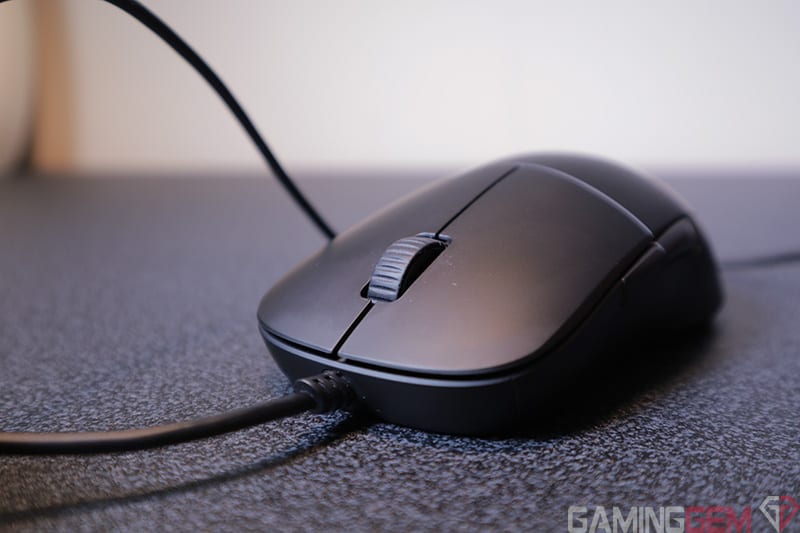 The gaming mice market is currently being spoiled by a list of new lightweight designs. Aside from the weight though mice manufacturers are also installing paracords as opposed to the typical rubber cables you would usually find.

Paracords are lightweight alternatives that don’t cause drag on your mouse mat and can even make the mouse feel wireless.

This is another section where the Endgame XM1 lacks. The rubber cable is too stiff for my liking and if they had installed a paracord it would have made this mouse so much better.  Looking at the pictures above you can see the stiffness of the cable as its standing up on its own.

The rubber cable is alright if you put it in a bungee, I didn’t notice it being a problem after weeks of testing but it seems to be a misjudgement to not follow the current trend and install a paracord instead. 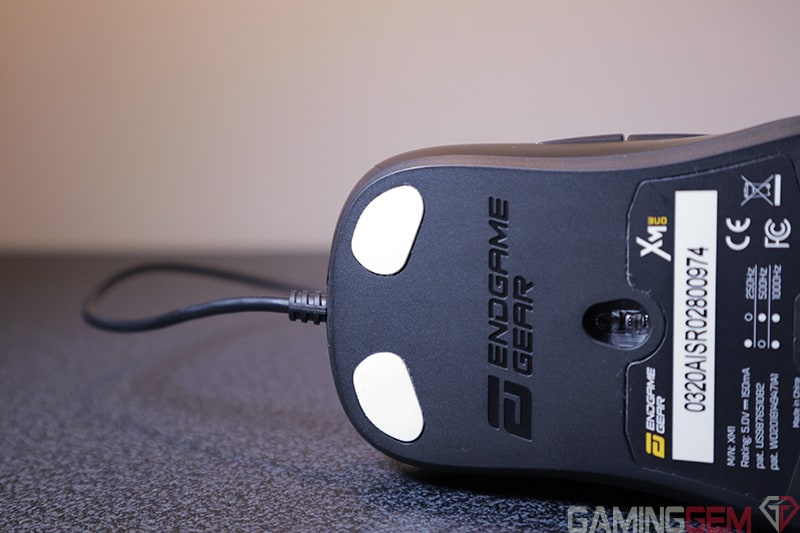 Endgame has installed PTFE mouse feet which are becoming the industry standard as they glide much smoother compared to your normal stock mice feet. I have tested the mouse using my Zowie GSR and Steelseries Qck+ and the glide is great.

It would have been nice to receive some replacement feet with the mouse since this is something you usually get with the likes of Zowie. Considering the price point too it isn’t too much to ask.

Having had the mouse for a few weeks now I have noticed no durability issues. The mouse buttons have no rattle or wobble and shaking the mouse shows no signs of loose components.

The side walls feel sturdy and the scroll wheel is consistent and stepped nicely. Overall the mouse feels solid but again, it would have been nice to have some replacement mouse feet in the box.

Within the software, you can upgrade the firmware of the mouse and configure the DPI at each of the 4 configurable settings. You can also configure the lift-off distance to account for your pad.

The software is good, it does exactly what it needs to and no more but there are a few visual bugs particularly when selecting the DPI.

A great ambidextrous shape followed by some of the best primary clicks in the game.  Some room for improvement though.

Overall this is a great entry for Endgame into the gaming mice market. The Endgame XM1 has a fantastic shape that I have been having a lot of success with. The buttons are extremely good, to the point they are comparable to Logitech which is a big achievement.

The mouse’s texture feels grippy but does show fingerprints very easily. The side buttons are ok but could be better. If Endgame had installed a paracord this mouse would be even better, the rubber cable is a little stiff but fine if you put it in a bungee.

If you are interested in picking one up then you can CHECK PRICES HERE.